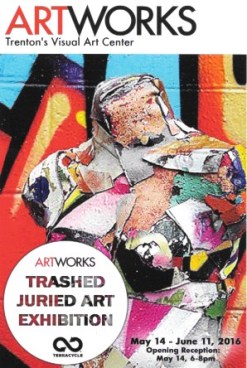 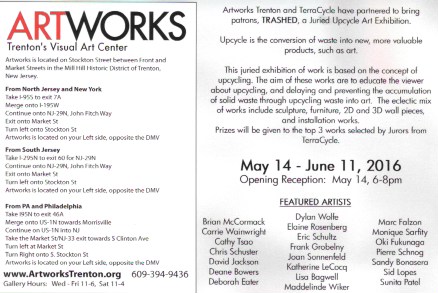 Exciting news! Got a piece accepted in another juried show.  This is year two of the upcycling theme for ArtWorks Trenton.  I did get a piece accepted into last year’s show as well. This year I made a zoetrope.  If you aren’t familiar with a zoetrope, well, it is an old school animation tool.  There is an animation reel inside the drum, you spin the drum and look through the slots on the side and the images come to life before your eyes!  They are super cool.  I had made 2 animation reels, one of a wave crashing and the other of a bouncing ball. I neglected to take a picture of either of the animation reels though.  So here is the postcard and a picture of me fiddling with my soda pop zoetrope.  They even spelled my name correctly on the postcard! Unfortunately the curator put it on a pedestal so low, you would have to bend over pretty far to look into the slots that make the animation work when spun.  But it was accepted into the show and was there, so I take what I can get.  It was a strange show this year, they were filming some reality show for Terracycle, so I had to sign release after release to go in. My love and I were trying to stay on the opposite side of the camera crews the whole time. I felt a little awkward, but then again, when do I not?